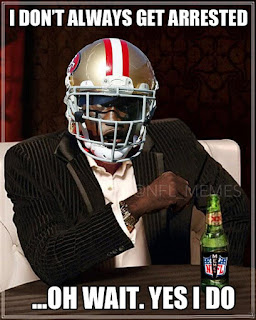 Things sure don't look good for Aldon Smith right now... The video below is making the rounds all of the main internet stops tonight. It allegedly shows Aldon Smith smoking weed on the video streaming site Periscope.

Smith has tweeted that it's not him. You can't clearly see who it is, but you can hear the voice. So I went to YouTube to compare an interview with him to see if it even sounded like him.

I'm no expert, but it does kind of sound like him. Technically speaking, it very well could be anyone.

The account titled "revenga" also appears to have numerous other videos with his face in it. So either someone hacked his account, or he just happened to not show his face in the one video where he's smoking a blunt.

So the unfortunate reality is that this video is, in all likelihood, Aldon Smith.

The problem is that this wouldn't be the first time he's gotten himself in trouble. In fact, he's had a really hard time getting his shit together. He's currently serving a suspension for violating the NFL's substance abuse policy, he was arrested for being uncooperative with the TSA, and he's had a hit and run, just to name a few.

Check out the video below and make your own call.