PewDiePie Responds to The Wall Street Journal and Claims of Racism

A very interesting story has been unfolding the past few days, and it's come to the point of bordering on insanity.

You would probably assume that it would have something to do with the circus going on at the White House, or literally anything happening in American politics right now.

However, I'm talking about a story that the Wall Street Journal published about one Felix Kjellberg, aka PewDiePie. If you don't know the name, you've been living under a rock. PewDiePie is the top YouTube content creator on the site with over 53 million subscribers and over 14 billion views on his videos.

One of those pranks in early January involved a stunt on the website Fiverr, where you can essentially find someone to do just about anything for a $5 fee. PewDiePie decided to test the limits of this concept and see how far people were willing to go for five bucks.

While a lot of people turned down his ridiculous requests, a couple did not. One "gig" asked a man who looked like Jesus to say "Hitler did nothing wrong." The man complied, resulting in the shocking imagery of Jesus condoning Hitler's genocide in the 1930's and 40's.

Another "gig" asked that two men hold up a sign that says "Death to all Jews." The two Indian men complied as well,

Out of context, it sounds bad. However, if you watch the YouTube video you can see the absurdity in what PewDiePie is requesting and the point he's making about how ridiculous it is that people are willing to say hateful things for $5. The context of the videos wholly show that Felix is not promoting hate, but commentary about Fiverr's website and I suppose one could say human nature.

The Wall Street Journal claims that Felix has repeatedly used anti-semitic language and imagery in multiple videos since August. The writers of that article took those clips out of context and questioned Disney about them, forcing them to make a PR move and drop their affiliation with the YouTube star.

As a comedian, the irresponsible journalism from the Wall Street Journal is appalling. The writers of that article scoured months of PewDiePie's channel to pull a few clips out of context and manufacture faux claims of racism. Now, people who may be older with less understanding of the nature of Felix's channel believe that he's a fascist. Just ask JK Rowling. 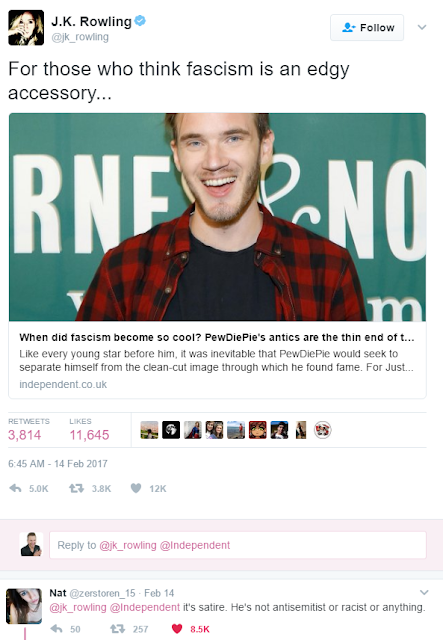 This is what happens when people just react without understanding context and perspective. Even someone with such a high profile, and who understands the sensationalist nature of the press... JK Rowling immediately jumps on the bandwagon.

The irony is that the clips where there are images of Hitler or Nazis were taken from videos where Felix mocks how the media takes things out of context to create a completely inaccurate story, so that they can create a narrative with a catchy, "click bait" headline to get more readers.

It really bothers me as a comedian, and as a human being, to see that happen. This article filled with distorted information was created to draw attention to the Wall Street Journal, and get some clicks. In a world where old school media is dying and these publications get more and more desperate, they get more and more willing to publish anything. Even when it's misrepresented or flat out false.

As PewDiePie says in his response video, this wasn't just irresponsible journalism... this was a flat out attack by these writers on his career. This has had serious implications for him. Not only did Disney drop him, but YouTube canceled his upcoming second season on their premium "Red" service. He was also dropped from their top tier advertising.

While this was definitely an attack by the writers, I can't completely blame the media. The media only has the influence they do because of the people that read their publications. If people weren't so quick to sensationalize stories, and engage with "click bait," they wouldn't publish it. So there's something to be said about the ignorance of people and our nature to go after juicy drama. It's kind of sad, really.

The thing that's even more sad though, is that a respected publication like The Wall Street Journal hasn't acknowledged the ridiculousness of their reporting. Not only that, they doubled down on the ignorance in another article. Note the use of keywords "professional" and "standard." 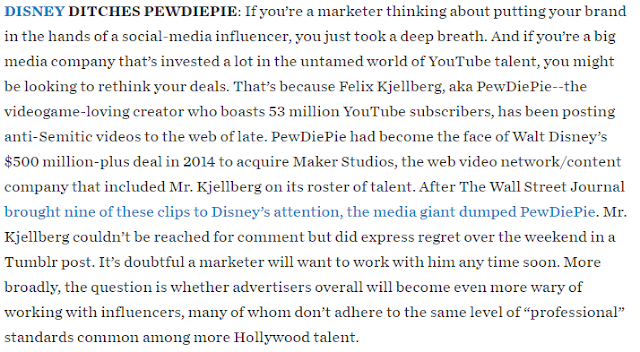 I also can't help but feel like this was an attack on young people and a retort equivalent of an old man yelling at kids to get off his lawn. Old school media still has a huge influence, but so do young people. Now more than ever.

Young people are amassing huge followings on YouTube, Twitter, Instagram, SnapChat, etc. Social media has given everyone a voice, some louder than others. Look at Cameron Dallas and countless others...

This ability to reach so many people so quickly and easily, scares people. Especially older ones that are used to the status quo, and having trouble adjusting to these new ways to communicate.

One of those older people who isn't having trouble adjusting is Donald Trump. The guy loses his mind on Twitter a few times a day, but let's stay on topic.

Ultimately Felix has apologized for going to far with the jokes, as they had an effect that he didn't intend. However, the damage has been done to his career and overall public image.

Public image is important, and that's one thing that is fascinating about the way mainstream media treats YouTubers. They focus on how much money is being generated, and not necessarily the content or focus on why so many people watch this content. Networks and media should be looking at this and trying to figure it out... Not trying to downplay or discredit one of the biggest organically grown stars we've ever seen.

This is an historical phenomenon. Seriously. There has never been anything like this in the past. The old "gate keepers" in television and Hollywood are becoming irrelevant. Not completely, but it's a fascinating thing to watch.

On demand services and networks continue to grow... Hulu, Netflix, Amazon Prime, YouTube Red, Crackle, etc. Someday soon we might see broadcast television as a thing of the past with new forms of entertainment and talent carrying those creative torches.

I think Donald Trump is a pompous blow hard, and his attacks on the media are complete nonsense. He hates them because they call him out on the stupid shit things that he does and says, and it doesn't make him look good. However, reputable media outlets like The Wall Street Journal pushing irresponsible journalism the way they did with PewDiePie is the exact reason so many people believe him.
Posted: 2/16/2017 11:49:00 AM