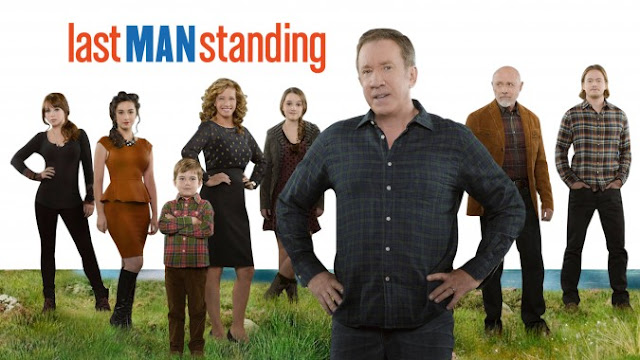 I have to be honest, I've never watched "Last Man Standing." I tried watching the first episode a couple of years ago, but it failed to keep my interest with the tired multi-camera, canned laughter format.

I know there's successful shows that still use the classic sitcom format, but I'm not watching any of them. The last traditional sitcom I watched on broadcast television was probably either Friends or Frasier, whichever ended later. I can't remember and I don't care to look it up.

I did watch a lot of "How I Met Your Mother," but only after it was on Netflix. I've seen a few episodes of "Big Bang Theory," but that was on an airplane. Anyways, my point is that I just can't watch those shows anymore. The canned laughter for lines that aren't even jokes.

Maybe it's not the format that's tired, but just the bad writing. I don't find any traditional sitcoms funny anymore. Now, single camera shows like Louie and Maron I found hilarious. However, the writing and characters were really funny.

I can still watch Seinfeld and laugh my balls off, even though I've seen all nine seasons many times. I went back and watched Cheers and Frasier from the beginning. Those shows have excellent premises, characters, and stellar writing. I don't even notice the laugh track because I'm ACTUALLY laughing all the way through it.

I suppose the other part is that I can't watch broadcast television anymore. I hate watching one show at a time and waiting a week for the next episode. I don't have the patience for that. I know I sound like a douche, but I enjoy watching multiple episodes of a show back to back. It's like watching a really long, interesting movie, and I don't forget what happened the previous week.

Even with streaming, I still couldn't make it through ten minutes of  "Last Man Standing." It's possible that I didn't give it long enough. It's been on for six years and clearly a lot of people like it. However, it's unlikely that I'll give it another chance. There's just too many good shows and movies to watch, with so little time to watch them.

I don't really care about the politics either. That may have been a factor in the motivation to cancel the series, but that doesn't determine whether or not I'll watch a show. Unless they're running for government office, I don't really care what side of the aisle an entertainer feels more comfortable.

I think political lines that we draw in this country are more arbitrary than legitimate. Most people think they need to align themselves with a party, but the parties are corrupt as an institution... The same as the politicians that constitute them.

The reality is too, that most people can fall on either side of the spectrum for different issues. For some reason people attack the left or the right with name calling and other bullshit, as though you have to be one or the other. It's not an either/or situation. The political parties have painted it that way. They've made teams and you have to sign up for one.

Both Democrats and Republicans are corrupt and political parties, and boast candidates that are full of shit.

The world is more gray area and chaos than it is order with nice clean lines and labels.

I kind of went all over the place with this one. Haha

Anyways, here's Looper's take on the real reasons "Last Man Standing" was canceled. They do a very thorough job of examining the situation (comedy).