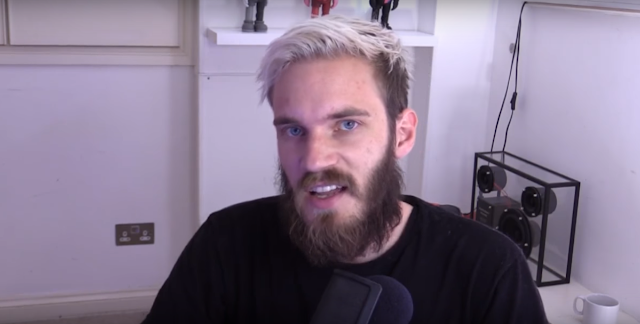 Given the fact that I have defended the YouTuber Felix "PewDiePie" in the past with the Wall Street Journal, I feel like I needed to say something about the latest issues that have come up with the gamer turned millionaire.

When the Wall Street Journal posted their article on him being a "Nazi," it made me upset to see such irresponsible journalism from such an established media outlet. Their piece was lazy and pure click bait at it's essence. Many other mainstream media outlets followed suit, based on this one article, and perpetuated a false narrative.

That being said, what Felix said recently on one of his live streams is indefensible. I've read excuses like the fact that English isn't his first language and that he didn't grow up in the United States where the origins of that word were used to enable the subjugation of an entire race for hundreds of years.

I understand that words don't have the same meaning when it's another language, and you haven't been exposed or really understand the history. However, there's never a reason to use that word towards anyone for any reason...regardless of context. In addition, he's been a public figure and an adult in the world long enough to know how and why so many people find that word incredibly hurtful.

In case you haven't heard, Felix used the "N-word" in response to another player essentially being an asshole the game he was playing. He quickly followed it up by saying he meant that the other player was being an asshole, but the damage was already done.

Do I think PewDiePie is a racist? I don't know. I don't think that he is necessarily, but I don't know him personally. At the very least, he's definitely racially insensitive... and the fact that he could use the word so casually on a public live stream begs the question of how often he uses the word in private. It's not something that comes out of one's mouth easily or randomly.

If you want a good recap and perspective from a fellow YouTuber, you can watch Phillip DeFranco's coverage of the events embedded below.


All I can really say is that I'm disappointed. I defended PewDiePie when the mainstream media attacked him, but now there is no excuse. There was no context, joke, or anything that could explain this kind of behavior.

I've watched his response that I've also included below, and I appreciate the fact that he's taking accountability and not making excuses. However, I think it's going to take time to heal the wounds that he caused people by doing what he did, if they ever can be. Some things once they are said, cannot be unsaid. What happened has and should make people question his moral character.


It's true that we all make mistakes, but no one should just be forgiven right away... if at all. When we fuck up, especially when it's big, we have to atone for it. The people that make the mistakes don't get to decide or dictate how other people feel about it. So only time will tell if the public can forgive him, as well as see if he remains accountable, humble, and earns their trust back.

Personally, I'd be wary of ever putting my trust in him to do the right thing at this point. As much as the WSJ hit piece on him was bullshit, which triggered the losses of his YouTube Red series "Scare PewDiePie" and Disney affiliation, it was a good thing they did given what has transpired. If they didn't before, they would now.

I've seen comments around the context of "words only have the meaning you give them" or "words have too much power." Both of which I agree with, but what's also true is that communication and the words you use only matter in the context of how people interpret them... regardless of your original intent.

That word in particular is loaded with hundreds of years of oppression of a specific race of people. That word has a specific meaning to them (as well as anyone with half of a brain who took a history class), and that's not something you can ignore. The impacts of slavery and racism are far reaching and undeniable. Not only in day to day lives and interactions but socioeconomically in history since abolition.

We'll just have to wait and see how he conducts himself in the future, if any of us are still watching.