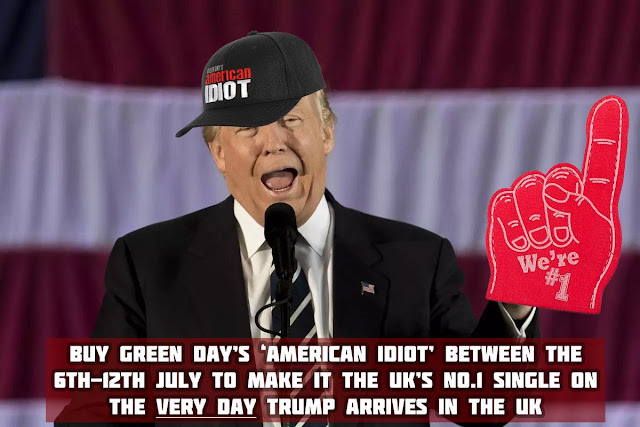 President Trump is set to visit the UK on Friday the 13th, and to say that the British are unhappy about it would be a massive understatement.

There's been a largely successful campaign on social media to get the 2004 Green Day song "American Idiot" to number 1 on the charts. The song has already hit number one on Google Play and Amazon, with their sights set on iTunes and all of the major streaming services.

The push has been supported by multiple members of the band (why wouldn't they want a 14 year old song charting again?), but not everyone is happy about the lack of support for the President.

Your point is moot. We are all well aware how weak, wobbly, tepid, and flatulent our government is. Brexit is indeed a disaster...pretty much the entire British intelligence voted against it but Hey, you lot know what it’s like to have a ridiculous result of a vote right? https://t.co/UXgYhLqx8h
— American Idiot For UK No.1 When Trump Visits (@TrumpIdiotNo1) July 10, 2018

How awesome is this? 😁

Keep it going my fellow Brits... we are closing in and we have until Thursday night pic.twitter.com/61jcSnECLf
— American Idiot For UK No.1 When Trump Visits (@TrumpIdiotNo1) July 10, 2018

While we've seen a lot of the pitfalls in the age of social media and can end up feeling more disconnected or even over-connected at times, it's actually pretty amazing to see how powerful it can be when used for something some might call "good."

Personally, I would consider it a "good cause" because it's a protest against political views expressed in an effective, non-violent way. Is it going to change anything in the Trump administration? Most likely not, but it's still a fun way to protest.

Ultimately, real change isn't going to happen in the US political system until more communication about issues, as opposed to partisanship, is the main priority. It shouldn't be about political parties and picking sides... Both the Democrats and Republicans are guilty of this and I don't think there's going to be an easy way to make that happen. We'll just have to see what the future holds and keep trying.
Posted: 7/10/2018 11:28:00 AM