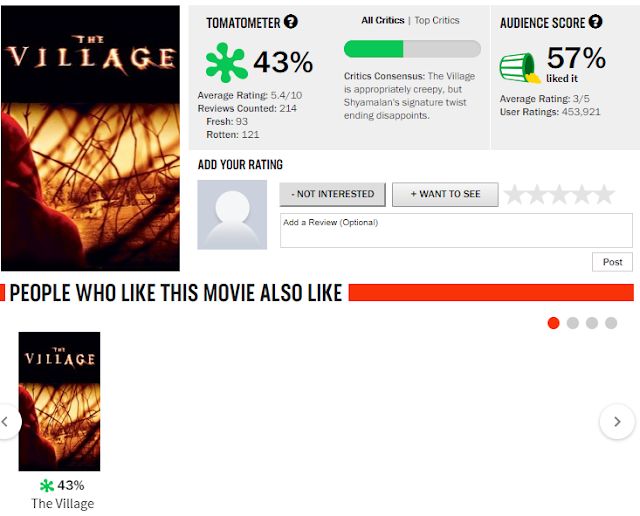 I saw this on Rotten Tomatoes and couldn't keep my mouth shut. I was watching the trailer for "Glass" and started thinking about M. Night Shyamalan's previous movies that people considered failures.

Lady in the Water is probably the only movie of his that I really didn't like. I was trying to pinpoint when he started getting a bad reputation, (as well as subsequent redemption) and I really think it started with "The Village." One could argue that it was "Signs," but I beg to differ.

Signs has a 74% rating on Rotten Tomatoes, and is generally liked by critics as well as the public. The only caveat being that the aliens' weakness is water, and we tend to have a lot of that on Earth. I agree that it's a pretty weak plot point that should have raised some red flags as he was writing it, but then again maybe there was something about the aliens that causes that. I don't know. However, that wasn't the weakest part of the movie for me...

The way he slapped the audience in the face with the double entendre of "Signs" ... being from extraterrestrials as well as God/religious symbolism was where I chuckled at the whole thing. To me it just seemed like he smugly thought it was soooo clever, when it was ridiculously obvious. I wonder if Mel will get is faith back again??? Okay, let's not go there.

Anyways, critics loved "Signs" but not "The Village" and that makes no sense to me. I think it's a fantastic movie and now that I'm thinking about it, one that I want to watch again. It's well acted, directed, and well written... In my humble opinion.

The film develops an intense atmosphere, stunning cinematography, and a cast of unique characters that suck you into the story. The thing that people hated was the "twist" ending, *spoiler alert* being that they were in present day and there was no supernatural beings haunting the woods.

I thought that was a great twist that no only surprised me, but grounded the movie in a way that no supernatural plot lines could have done. It makes the peril of Lucius's situation that much more nuanced. They're living in present day, yet don't have the means to help him and a blind girl is the one that has to go get assistance because they don't want the secret revealed. For me, it invokes a lot more emotion (both negative and positive towards different characters for different reasons) than if it had been just some weird monsters in the woods.

Maybe I'm in the minority here, but I think "The Village" was misjudged and was a much better movie than if people had gotten what they wanted, had devolved into some ridiculous monster movie.