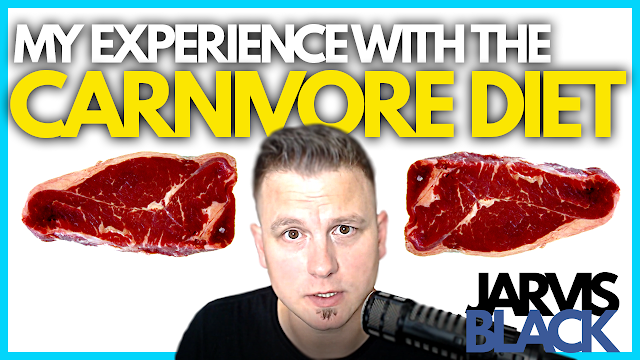 About a month and a half ago I was at a crossroads in my life with my health and decided to try this crazy thing called the Carnivore Diet. I mostly cut out sugar in my early 20's, but still indulged in other forms of refined carbohydrates and grains on occasion. However, when I would gain weight I would just reduce carbs and intermittent fast. I didn't really get a lot of exercise.

This had worked for me over the past 15 years so I was very surprised when it didn't work earlier this year. Around March I went back to eating my traditional low carb diet rich in vegetables but with limited animal protein, and started back on a cardio heavy work out regimen. After three months of working out and limiting carbs, I hadn't even lost a pound and felt weak.

This was very disturbing to me because over the prior two years I had gradually put on about 20 lbs. I felt like I was doing everything "right," but it was not working. To top it all off, I started having nightly panic attacks (panic disorder runs in my family) and the tendinitis flared up in my ankle. It was excruciatingly painful but I powered through work outs every day because I didn't want to lose my exercise momentum.

It was so painful that I went to the doc for x-rays because I thought I might be arthritis or bone spurs. The last thing I wanted was to derail working out because I refused to quit and wasn't going to stop until I regained my health.

From March to mid-July I was working out every day with cardio and resistance training with no weight loss and no strength gains. I was beyond frustrated and at my wits end.

A year prior to this I heard Joe Rogan's podcast with Mikhaila Peterson. I thought it was interesting, but thought there must be a reason why it helped her with her auto-immune issues. I saw that there were a vocal few promoting the diet, but thought they had to be crazy. There's no way that it's healthy not to eat vegetables right?

July 12-14th I was up late at night because I was having a hard time sleeping due to my frequent panic attacks. I remembered what I had heard about this diet previously and also discovered Dr. Shawn Baker talking about it. I was stressed out and incredibly frustrated that I had been working out and eating "healthier" and not making progress. After nightly debates with myself while staring at the dark ceiling of my bedroom, I decided to give carnivore a try. After all, I was already very familiar with low carb so this wasn't that much of a stretch. The biggest difference was that I was going to have to eat more fat, which I was very apprehensive about because everything and everyone has beat the idea that fat is horrible into me my entire life.

July 15th was my first day of Carnivore. What did I have to lose if I try this for a few days and see how I felt?

After a few days, I had lost a couple of lbs, which I had anticipated, and knew would mostly be water weight. I wasn't impressed because I know that weight would come right back on since it's just water. What shocked me, however, was how good I felt after just a couple of days. I thought I would be dragging and craving something to up my blood sugar. While I did have some cravings, it really wasn't bad at all. So I thought I would try it for a week.

After a week, I felt fantastic and thought why not try it for another week? After two weeks I felt so good that I knew I needed to give it a month... After a month, I made the decision to give it six months.

Right now I'm at six weeks. I'm down 16 lbs. I have tons of energy. My skin is clear. My tendinitis is completely gone. My breath doesn't smell in the mornings. I feel mentally sharper. Anxiety and panic attacks have greatly reduced. My blood pressure is at an all time low. All while eating lots of red meat, fat, and salt. All things that people said my whole life are bad for you. How does that make any sense?

For now I'm going to stick with what is making me healthier and feel better. Whether or not it's something I will do forever, remains to be seen. For now I'm fully on board.

I made a video about my first six weeks on Carnivore. Please note that I'm not recommending this diet to anyone. I'm only sharing my experience. If you're interested in adopting a diet or exercise plan, consult your physician.