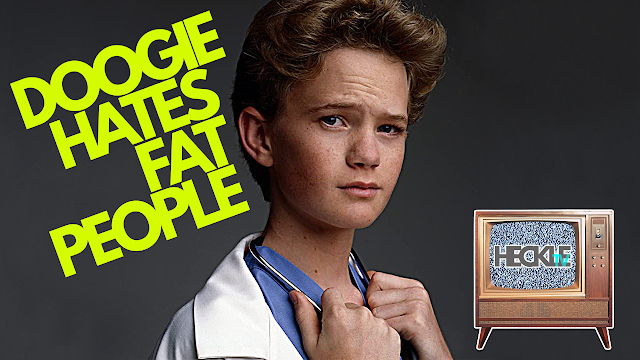 I loved the show Doogie Howser when I was growing up. I recently started watching the series again on Hulu, because I thought it might be fun to see it again as an adult. The show is dated, of course, but for the most part holds up okay when it comes to the moral lessons that Dr. Howser learns each episode. Except for one episode that really stood out to me. Season 1, episode 9 titled, "She ain't heavy, she's my cousin." Doogie sets up Vinnie with Wanda's cousin from Miami. Vinnie thinks he's getting a "tropical beauty" but she turns out to be more than what he expected.

The episode fumbles around the topic of obesity and clumsily falls flat on its face. Doogie and Vinnie show that they are not all that nice when it comes to people who struggle with their weight, and are extremely judgmental without taking the time to truly understand the situation. Doogie is supposed to be a genius doctor, yet he can't figure out when someone needs help from a mental health professional instead of ridicule and shame.

This episode did not age well and sends a misguided message to its viewers. Then again, what do I know? I'm not a genius or a doctor.