Jack Frost with Michael Keaton is a Creepy Movie (1998) 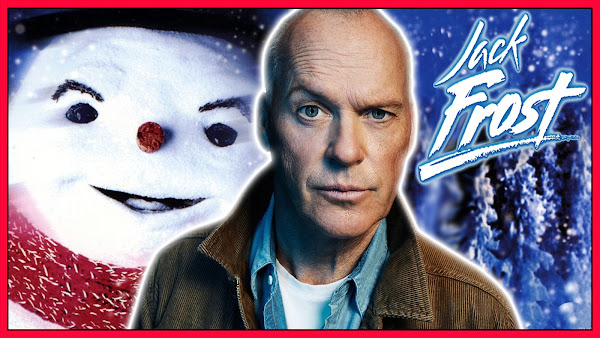 We all know the iconic character of Jack Frost. That is not at all what this movie is about, by any stretch of the imagination. This movie is really more of a weird take on Frosty the Snowman, if he were embodied by the soul of a man who came back to life for a brief final attempt to be a good father.
Michael Keaton plays "Jack Frost" who is a struggling middle-aged musician about to get his big break. He is so focused on his budding career that he neglects to give his son the attention he craves. Jack cancels a performance that could land his "Jack Frost Band" a record deal so that he can spend Christmas with his family.
Sadly, Jack encounters a terrible storm on the way home and meets an untimely demise. A year later his son Charlie builds a snowman with his Dad's clothes and blows into Jack's harmonica. Magical forces or something bring Jack back to life as a snowman so he can live in his ex-wife's front yard for a couple weeks.
If his family was trying to move on, they certainly can't now that he's hanging around all the time. I think the movie was supposed to be a feel-good family film, but it comes across as very odd to me. That's what I want to talk to you about today.
Posted: 12/19/2020 08:05:00 AM